Play Practice Play - How Does It Work?

HOW DOES IT WORK?

The coach will plan the layout for the session based on the number of players attending and the available space. The example layout below shows a full practice layout for 11 players using one half of a 7v7 field. As players arrive for practice

The coach will greet players as they arrive for practice, the player will then immediately start or join in small sided games. As the first two players arrive they begin by playing 1v1.

In play phase 1, Games should be no larger than 4v4. If/When the 9th player arrives for practice, players should split into 2 smaller games. (One 2v2 and One 3v2). If you anticipate 9 or more players to attend your practice, plan on setting up 2 small sided fields for play phase 1.

The position of the coach is very important to ensure that all players are playing in a safe environment, notice how the coach is positioned where they can see all players in both games in the diagrams above.

Empirical data has shown that children learn best when they get to experience periods of unstructured play where they can experiment on their own, it promotes enjoyment, inclusion and development. These three factors have been proven to increase motivation to continue playing. The coaches role during this Play stage is to ensure safety, monitor the games and “take the pulse” of the players. Monitoring the games includes making sure the games are not lopsided and providing adequate stoppages to allow the players to stretch and rehydrate. During the stoppages the coach is encouraged to ask guiding questions to lead the players towards the goal and objectives of the session. At the first stoppage, ask the players guiding questions but ask them not to answer you now. Rather, have them return to play to think about and try to figure out the solutions on the field. At the end of the first play phase, ask the players the same guiding questions and this time solicit answers from them to gauge their raw understanding of the topic. “Taking the pulse” refers to checking the player’s involvement and gauging their emotional state through active or in some cases avoidance of participation. In short showing the players how much you care about them right from the start of a practice.

Using activities to create game-like situations that create problems for the players to solve and the coach to assist with the problem solving process. A simple includes questions such as: Does it look like Soccer? Is it organized? Is it challenging? Are there repetitions? (Of the topic being worked on) and Is there coaching? (Consisting predominantly of positive reinforcement) but should also include the normalizing of errors. (Mistakes are an essential part of the learning process). During this stage coaches are encourage to set up small group activities that focus on the topic being worked on that day. We have also provided a set of Guided Questions that the coach can refer to throughout the practice session. The example below shows our 11 players participating in a 4v4 activity. Four Blue attackers will attack the regular size goal, the 3 Red Defenders and Goalkeeper will defend the regular goal and score on counter goals. Players on the outside will subsistute in after short periods of rest. In this stage we are checking to see how much if any of the practice stage has transferred with each player into the game. It is recommended in this stage that the coach sets up 2 teams of equal numbers and that one team is set up as close to the starting line up for the upcoming game as attendance at the practice permits. In ideal circumstances (which rarely occur) the coach should play in the game format 4 v 4, 7 v 7 e.t.c. that the players will experience in the upcoming game. The players should experience extended periods of uninterrupted play with the coach just monitoring the safety of the players and reviewing the checklist and guided questions to empower the players to solve problems on their own. In more realistic circumstances, our 11 players below are finishing a practice by playing a 6v5 scrimmage across one half of a 7v7 field. 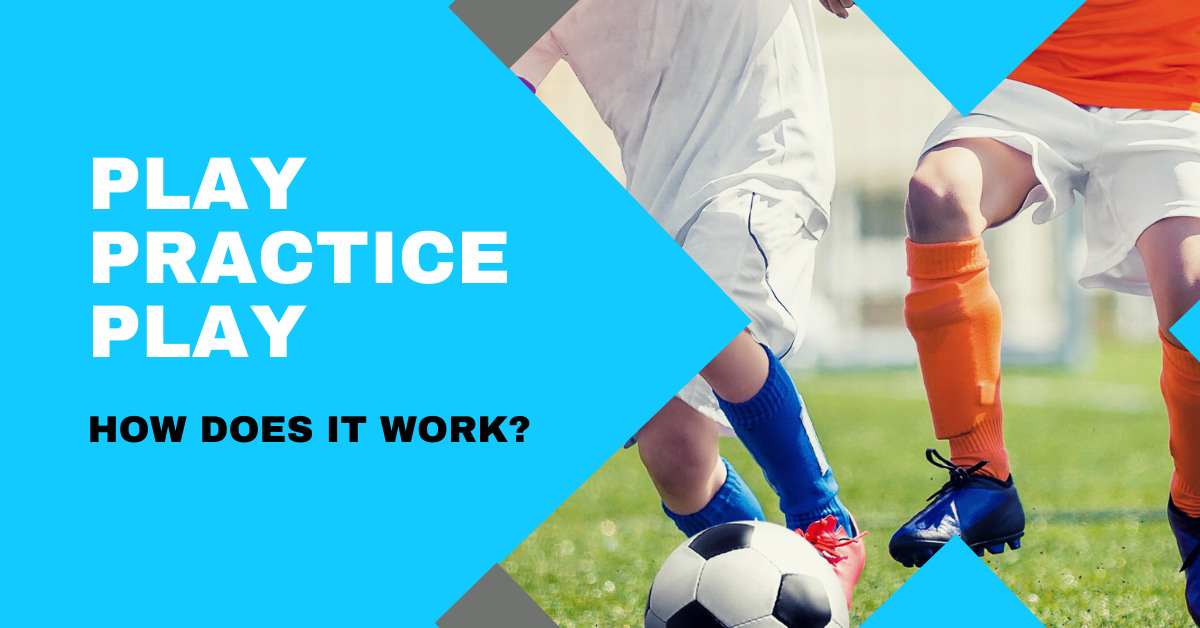